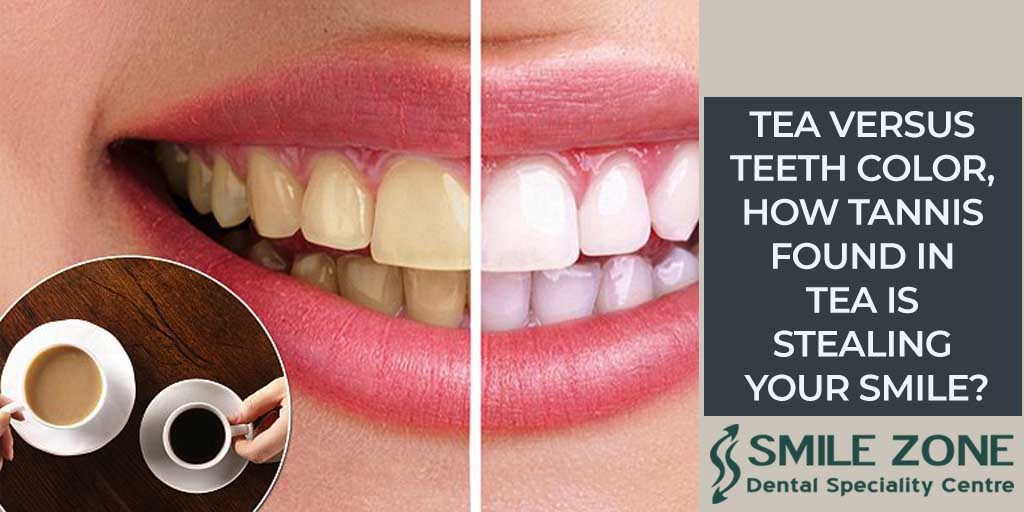 Apart from bringing benefits, tea also fetches some drawbacks such as staining which is prevalent in almost all societies because there will be hardly any region deprived of tea and due to its relaxing and mood enhancing qualities tea is sipped.

Tooth enamel is not as soft and plane as it looks, it contains some crests and troughs where some particles can stick and if you do not clean or floss your mouth after taking tea or meal then, stains can be permanent.

The harder par is associated with tea and most of the other drinks like red wine and colorful drinks, some foods possess an organic substance called “Tannis” which can glue up with teeth and can erode away the smile and can be a reason behind discoloration. Tea is having some other compounds along with tannis like Theobromine and Theophylline, which are stimulants and Xanthines which are nearly identical to caffeine.

Every tea leaves and coffee beans contain caffeine and tannis but these are not only that possesses tannis but cheese, wines and even some plants have it; presence of tannis in plants cause animals to stay away. It generally has a bitter taste but different human reacts differently to tannis tastes.

Even some companies promote tannis to take its more intake n their food and drinking products as it stimulates immune system, reduce heart attack risks and having anti-bacterial properties as well.

What else tea causes?

Here are some ways to limit tannis content in tea;

Adding some milk or cream can help in maintaining a balance between tea and teeth not to get its color fade away, chose green tea instead of black, even some green teas have some tannis compound but it is wise to opt for beverages which contain less tannis.

What to do after drinking the most loved beverage?

Rinse your teeth after each and every intake of tea, it will wash out all tannis and associated content right away, flossing after meals is also advantageous to keep the gems and teeth stain free.

You can also use whitening toothpaste when you think tea is blemishing you teeth. Brush with baking soda and salt about at least two times a day could remove surface stains caused by drinks.

If continuing with these precautions your teeth are still staining then you need to contact dentist.